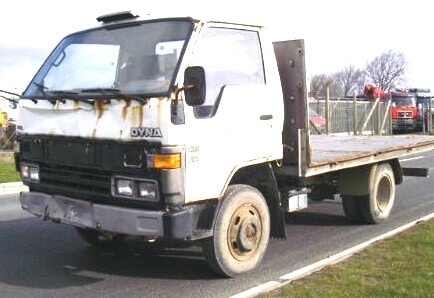 Sell your Toyota truck For Cash

Here is the big news, We at scrap car removals will now buy your unwanted Toyota vehicles along with free towing from your premises.

Your car can get you as much as up to $8,999 instant cash and we will take care of all the removals. Leaving your old Toyota in the garage or in your backyard it loses value trough time and also taking up space, Why not give us a call today and get “highest cash for Toyota on spot” regardless of its make or model and condition.

When selling your old Toyota we make sure that you receive completed forms and a receipt as a record that we purchased the car from you and to make the cancellation of registration easy. When the removal team arrives rot pick up the car, they will fill up a form and also will give you the amount quoted over the phone.

The payment will be in cash. The towing of your car only take approximately 5 minutes. The team is equipped with latest machinery and tools to make the tow easy and fast. You can rely on us for removing your car fast and from any suburbs or condition. We are able to remove your old trucks, 4×4, SUV, sedan, ute and much more.

The wrecking of your Unwanted Toyota is made easy. When you sell your car, If the year made is higher then the first step would be wrecking it for parts. Thats also one reason why we can pay more. All the process is taken care of by us, you just sit back and relax as your headache fades away.

We buy all kind of Toyota models for wrecking including:

Why Sell Your Toyota to us?

According to the Consumers’ Association’s survey of 150 car models, Toyota is the most reliable car brand. 10,000 owners of passenger cars from the year of construction 2009 participated in the study.

The results show that Toyota’s had the fewest defects in the past year. No fewer than five cars in the top 10 most reliable cars are a Toyota. Although they are reliable, it doesn’t necessarily mean they don’t get old and start costing money. You can get cash for Toyota cars by selling it to us. Buying a new Toyota could be the reason to sell your old one. Get cash for Toyota cars today by contacting us.

Do you want to sell your Toyota quickly at the best possible price? Have you already scoured the internet to place an ad everywhere? Waste of time! Contact us today and find out about our top prices for Toyotas.

We want to facilitate the process. So you can sell your Toyota car quickly and safely! A no-nonsense approach, with the best results. How? Well, we have created an online platform where you as a seller can get cash for Toyota cars.

The Japanese car brand Toyota, founded on August 28, 1937, by Kiichiro Toyoda, is known for its good cars. Nevertheless, it is, of course, possible that your Toyota car has suffered damage, or that it simply no longer drives well. Whatever the reason, we offer you a platform where you can get cash for Toyota cars with damage or even major engine defects.

For every type of car, we give you our word and guarantee that we are willing to pay cash for it.

So, do you have a Toyota with a broken engine, broken head gasket, broken injectors, broken clutch, broken gearbox, broken turbo, an emissions issue or other damage? Contact us today and get cash for Toyota cars.

Do you want to put your Toyota away? You can sell cars at Scrap Cars Removal. In just a few steps you can receive a quote and get the process going.